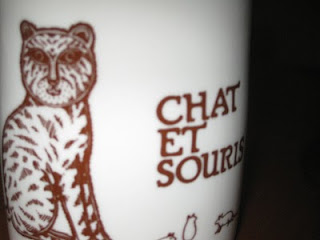 This is what I said to Dylan this morning, while she held me, while I was softly crying while holding my "Chat et Souris" mug. It was my grandfather's, an artisan's mug, one of a kind, likely made by one of the folks he hung around with in Chicago in the 60/70's - print makers, artisans, musicians. A very formal-looking print cat and a couple of formal print mice (two cats, two mice, so the mug is both right and left-handed) stand around the saying. My grandfather, like my mother after him, spoke French and he and I would discuss things in French sometimes, and often about The French and about France. I have quite a few of his things, since he was the "last to go" - his table, which now holds my sewing machine, his Mexican blue glass collection, his general everyday mugs, and a rug or two. But this was my favorite.

Was. It broke. Last night Dylan and I were getting ready for class, which is at my house on Wednesday nights. Dylan was trying to clean things - boiled some water to get sticky honey off our table, and poured out the rest into the sink. In the sink were two things - the Chat et Souris mug, which I am always super careful about, and a dirty rice pan. I almost picked up the pan - don't know why I didn't. Maybe I thought "Ick, what a mess" and that I would take care of it last. But I was laughing with Dylan and so totally forgot, even though she had been super careful about warning me to step back and we had talked about why she was boiling water. I reached into the sink, picked up the mug and after a two second pause in which the scalding water spilled over the edge and onto my hand and nothing happened at all, I dropped it. There was a pause (likely bad for my hand) while I considered if there were ANY way I could not drop it, knowing, knowing it would break.

The pain was super intense and sudden - I spontaneously broke into tears, barely had the wherewithall to both a) announce a loud yell and alert Dylan, now out of the room and b) switch the water, which I had been using to wash on hot, to cold to run over my hand. Dylan ran in, I bawled through the burnt hand enough for her to grab an ice pack from the freezer. For an hour or two (during which I used my non-dominant hand to call and text students to cancel class) the burn ran painfully through my fingers, and even with Ibuprofen, still flared up for hours after. The only relief was ice pack.

First degree burns. Not serious, not meriting ER or Outpatient, considering we have no health insurance but catastrophic anyway. We did what I knew, from a previous bad first degree steam burn, I needed to do - ice it, ointment, ibuprofen. I fell asleep in fits and starts, my hand occasionally burning alive for a few minutes at a time.

Upon waking, dressing, making breakfast, I reached for the Chat et Souris mug like I often do in the mornings. It practically lives in the drying rack since we both use it so much, which is good. I made a choice long ago to use it - I lost my mother's wedding ring because I used to wear it, have lost numerous important earrings (including one of a set Rebecca gave to me), and more, because I used them. That's good. But hard. I worried that I had cracked the mug the night before but it looked ok - one sploosh of boiling water from same kettle and a quick glimpse inside showed a hairline crack (stunning considered I dropped it into a cast iron sink from a foot above). The water seeped through. I sniffled. Wah. Dammit.

"The mug cracked" I said to Dylan, as she was in the dining room eating breakfast. "Oh, honey." "Time to retire you," I said to the mug as I rinsed it, tried to find a place for my wet tea bag. I put it into the pottery bag I keep in the kitchen until it fills, then put it in the basement. A large collection is amassing there - one day I'll either ask a friend to make a mosaic out of my favorite dishes, or I'll do it. The bag already had one of our wedding set plates, the second to break, in it. Not a biggie: from Target, replaceable.

"We can use it for something else, even if it can't hold water," Dylan said, and I hadn't even thought of that, was grateful for the reminder, but it hurt too much to consider at the moment. Later, I did pull it out and rinse it again and set it aside to dry. She's right. She came up behind me and hugged me and I said "People should never die and stuff should never break," and cried.

All of a sudden, a counter voice:
"Sweetheart (Natalie says this a lot when addressing her critical self), Don't take it Personally." From somewhere inside my head, a voice of gentle loving reason.

What?
Don't take it personally? Of course I am not taking it persona...
Wait a second. I am taking it personally. I feel betrayed. The mug wasn't supposed to break. I lost so many people so young, the least I could get is the mug to last. A few recent deaths flash through my head: a friend's friends 21 year old son, a few students' moms or dads, another acquaintances 31 year old sister. Shit. Hey. This happens to everyone. Not just a lot of folks, but everyone. We all die.

Now I have done a LOT of meditation on death and impermanence, read books, processed a lot of my grief. And I have said that last sentence more times than I can count in more tones of voice than I can count. But all of a sudden, there was a direct line of communication between my little girl heart and my voice of reason. I could feel my inner child look up suddenly and say "You mean, it's not my fault? Not about me? Not a betrayal?"

Of course I am NOT the only one to feel this way. Read any Pema Chodron or even standard psychology text and you'll see quickly that our expectations and beliefs are what most often trigger our shock and hurt. We, as a society, are harboring some serious self-deception about death. And yet. With all the work I had done (I say this with wonder, not judgment) there it is. A tiny piece of my heart that was still holding out, still fiercely protecting herself by pretending someone fucked up, or that something was wrong with her, or that she had been hurt on purpose, she heard the message, for the first time, for now. At first it hurt, like the burn, like a bitch. I cried, but then the voice said : "Mugs break. People die. Everything is impermanent. It's not your fault, Sweetheart," and she replied, "Thank you, Thank you."

PS: I did a quick search and found out more.
And no, I will not be buying a replacement.
Posted by miriam at 8:18 AM 7 comments: